The Bread and Salt Between Us: Recipes and Stories from a Syrian Refugee's Kitchen (Hardcover) 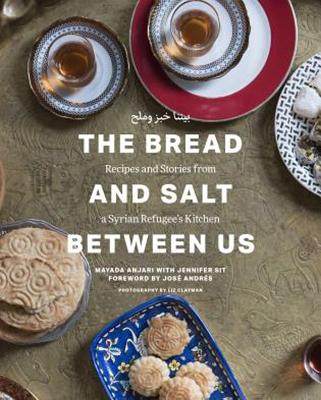 By Mayada Anjari, Jennifer Sit (With), Jose Andres (Foreword by)
Email or call for price.
Backordered

Organized by everyday fare, celebrations, and sweets, The Bread and Salt Between Us offers over forty recipes that recall the flavor and comforts of Mayada's home in Syria. From the fresh tabbouleh she learned to prepare alongside her mother and sisters to the rice pudding that won over her future husband, these easy-to-approach dishes tell the story of a family whose culinary traditions have sustained them as they build a new life in the United States. To show her gratitude to the community that sponsored her family's resettlement, Mayada prepared a meal. This simple act of sharing food ignited an outpouring of support. A regular supper series ensued, drawing crowds that were as enthusiastic to help her family as they were to enjoy her cooking. The story of Mayada's journey is beautifully chronicled in this personal recipe collection. All proceeds from sale of this book will directly benefit Mayada's family, and members of the refugee community. Foreward by Jos Andr's.

Mayada Anjari is a mother of four and an active home cook. She lives in Jersey City, New Jersey. Jennifer Sit is a cookbook editor, writer, and James Beard Award-nominated coauthor of Senegal: Modern Senegalese Recipes from the Source to the Bowl with Pierre Thiam. She has edited cookbooks at independent publisher Lake Isle Press and at Blue Apron, including the IACP Award-winning Blue Apron Cookbook. She lives in Brooklyn, New York. Liz Clayman is a New York-based photographer specializing in culinary and hospitality images.